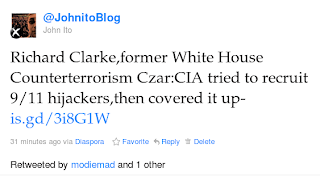 I suggest you read The Daily Beast first, about the remarks Clarke made in a planned documentary on 9/11.

Richard A. Clarke warned the Bush-government of a 9/11 repeatedly.He was ignored.He got bashed, and eventually resigned as counterterrorism czar.

The million dollar question of course is : Why? Why would the CIA try to cover up their attempts to recruit two 9/11 hijackers?

I don’t know, though I do have my theories. Some of the theories I’ve been exploring in the past ten years may have turned out to be outrageous, but I think it’s very sad when so-called debunkers say something like: “Do you really believe that the American government would kill so many people on purpose?That’s just sick!”

Excuse me?! Did you forget about the killed civilians in Iraq, Afghanistan and the 168 children in Pakistan??!

Remember: The Iraq and Afghanistan wars were pre-planned, before 9/11.

And, amongst other high profile figures from both the political and intelligence theatre, even members of the official 9/11 Commission have cast strong doubts on the offical 9/11 story.

We now know for sure that, though Al Qaeda is still presented as an enemy to all of us: in Libya they’ve been working with western intelligence services, and they fight side by side with NATO, thus stealing the uprising (if any) against Gaddafi.

Not for freedom, democracy or other humanitarian reasons, but for corporate profits.

So, given the fact that, since Kosovo and now in Libya, Al Qaeda appears to be fighting on “our” side, and Clarke’s warnings about coming terror attacks were deliberately ignored over and over again: we seriously have to ask ourselves the question if Al Qaeda really is an independent terrorist organization, or a psy-op, run by rogue elements within western agencies and governments.

I know what my answer is to that question. But I am not important.

The victims of the 9/11 tragedy and the following war on terror deserve more than just my assumptions, or even Richard Clarkes’s assumptions.

They deserve the independent and thorough investigation, that both John O’Neill and the 9/11 Commission were never able to impose, nor allowed to finish.